What Are Pain Episodes?

A simple blood test can tell if you have the sickle cell trait.

If both parents have the sickle cell trait,

there is a 25% chance (with each pregnancy)

that the child will have sickle cell disease. 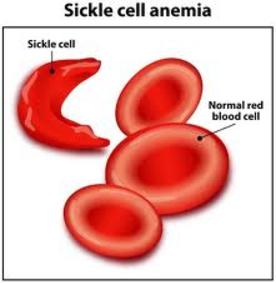 What is the Sickle Cell Trait?

Sickle cell disease is an inherited condition that affects the red blood cells. It is characterized by the red blood cells becoming sickle shaped and stiff. Sickle cells are fragile and break up faster than the body can replace them, causing anemia.  Persons with this disease experience periodic pain and other health problems.  Sickle cell anemia is the most common type of sickle cell disease. Other types are hemoglobin SC disease, hemoglobin S/beta-plus thalassemia, and hemoglobin S/beta-zero thalassemia.​​​​​​​

What is Sickle Cell Disease?

A person who has sickle cell disease can be a victim of what is known as a sickle cell pain episode or crisis.  When a large number of sickle cells damage and plug blood vessels, it is difficult or impossible for the blood to circulate normally.  This causes severe pain, which may occur in any part of the body.

A pain episode may require immediate medical attention and could be set off by an infection, fatigue, unusual stress, over-exertion, or high altitudes.  The periodic obstruction of blood vessels damages many organs and may cause other health problems, such as leg ulcers (resulting from poor circulation), strokes, and decreased resistance to infections.​